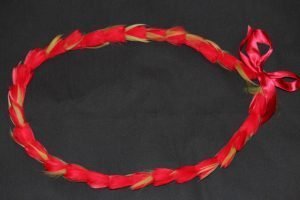 Funny story about the first red rosebud lei I made. I was finishing it on my flight back to Portland from Hawai’i in November 2009. An older gentleman passed me as he was walking down the aisle of the airplane to go to the restroom. He asked me “How much would you sell that lei for?”. At the time I did not give him an answer because I wasn’t sure if he understood the value and the amount of time it took me to cut each feather and then individually tie it onto a central cord. He later came down the aisle again and said “Seriously, how much would you sell that feather lei for?”. I told him that it took me about 30 hours to complete and to make me an offer. He said he would be back. He came back and asked if I would take $100 for it. I told him I would and that I would bring it to him once it was finished. I brought it to him after I had it finished and he gave me $120. He told me he was the retired Athletic Director at Punahou School (where our current President attended and went by Barry instead of Barack). He was on his way to visit his adult daughter who was having surgery and the lei was going to be given to her. We exchanged phone numbers and he called me
the following day to thank me for the lei. He said his daughter really appreciated it and she was saying thank you in the background during the call. I’m glad it went to someone who appreciated it!